The Nexera UC LC/SFC switching system makes it easy to switch between LC and SFC just by adding a single LC pump to an SFC system. By utilizing this system, conventional LC analysis can be performed as usual. At the same time, with samples that are difficult to separate using LC, conditions can be investigated with SFC which has different separation modes than LC.

Enables Both UHPLC and SFC Analysis Using a Single System

Various methods are needed to separate chiral compounds, structural isomers, and other such substances in all sorts of fields, such as pharmaceuticals, foods, and environmental testing. Because supercritical fluid chromatography (SFC), which uses supercritical CO2 as a mobile phase, exhibits different separation behavior than ultra high performance liquid chromatography (UHPLC), superior separation results can be quickly obtained during method development by screening with both SFC and UHPLC separation methods.

By simply adding one solvent delivery unit to a standard SFC system, both SFC analysis and UHPLC analysis can be performed using a single system. Sharing the solvent delivery unit (for pumping organic solvents), autosampler, column oven, and detector for both SFC and UHPLC analysis minimizes space requirements and equipment cost and improves the equipment utilization rate. Moreover, this allows for selection of the optimal column from among a combined total of up to 12 SFC and UHPLC columns, when performing method scouting. 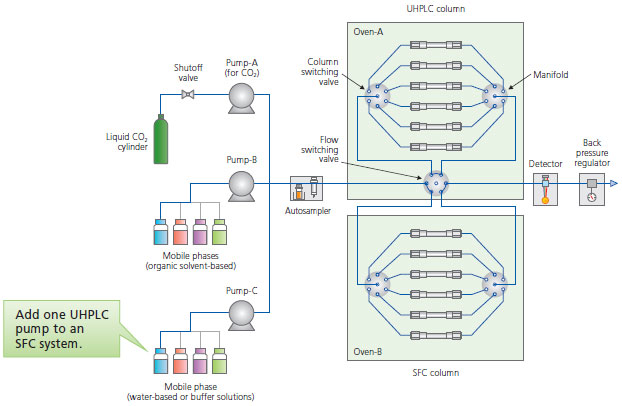 Software Performs the Work of Switching Between SFC and UHPLC

Purging of mobile phases, which is required when switching between SFC and UHPLC, is accomplished by simply executing a batch table automatically generated by the dedicated software. That means even first-time users can smoothly switch between SFC and UHPLC analysis. It also enables multiple mobile phases and columns to be used for method scouting. No reconnecting of flow lines is required when switching from SFC to UHPLC (or from UHPLC to SFC). Consequently, the system can switch continuously between both analysis modes without being affected by the preceding mode. 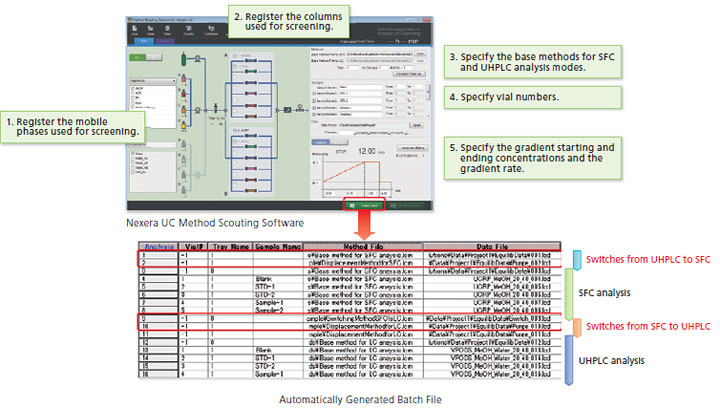 Reliable Analysis Even When Switching Between SFC and UHPLC Modes

SFC and UHPLC involves significantly different mobile phases and separation characteristics, but analysis can be performed reliably without effects from switching modes by simply purging the flow lines.

Using the System for Chiral Analysis

In this example, methods were scouted for two types of chiral standard samples using both SFC and UHPLC. UHPLC and SFC parameter settings in the method scouting software can be specified by clicking a button to switch between modes.

For Research Use Only. Not for use in diagnostic procedures.